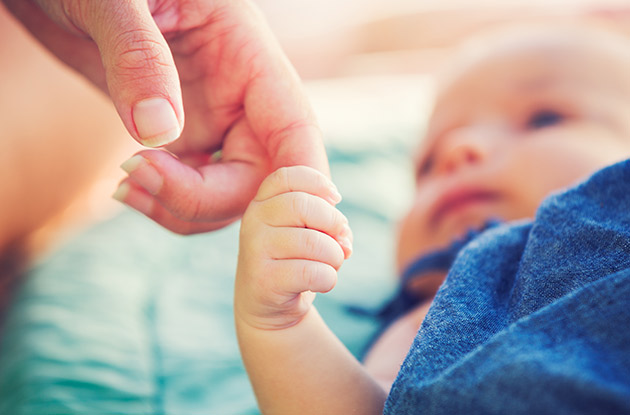 Here's How to Decode Your Baby's Reflexes

What this is: In reaction to a sound or nearby sudden movement, a newborn throws back his head, extends his arms and legs out, then pulls his legs and arms back in. He might cry as well. Some babies even display this reflex in response to their own cry. “They are often the reason babies wake themselves up from sleep,” Dr. Levine says. “This is why swaddling infants helps them to sleep better. Their arms are tucked in and can’t flail about.”

Why baby needs to stay balanced: “The reflex movement adjusts the baby’s posture to keep him or her balanced. Once a baby develops more voluntary control over movements, these automatic responses fade away,” says Devorah Segal, M.D., Ph.D., pediatric neurologist at New York-Presbyterian Komansky Children’s Hospital and Weill Cornell Medicine in Manhattan. And a good sense of balance is quite useful for a new human to have. For one thing, it can make it easier to grab onto your mother if she should start to lose her grip on you.

What this is: When your baby is lying down, and his head is turned to one side, the arm on that same side extends out, while the other arm bends at his elbow, like a fencer would stand.

How this protects baby: Much like the Moro reflex, Dr. Segal explains, this one likely originated as an automatic protective response to help maintain balance. After six months or so, “more purposeful balancing motions replace it,” she says.

What this is: Stroking your baby’s palm spurs her to close her fingers in a grasp. (A similar lesser-known reflex in the feet and toes usually lasts until babies are about 9 months old.)

Why this happens: It’s practice, essentially, for being able to master voluntary grasping, which will happen in a few months. Some experts call it a vestigial reflex, meaning its evolutionary purpose is no longer useful. It is thought to have originated as a way for babies to hang onto their mothers’ fur when humans were hairier. That alleviated the need for a mother to hold onto her baby while trying to, say, run from a predator.

What this is: Despite not being able to support his own weight, your baby moves his legs as though walking, even dancing, when you’re holding him upright with his feet touching a solid surface.

Why it's happening: This reflex is pretty much what it looks like: preparation and training for the all-important ability of humans to walk upright.

“The best thing for parents to do when it comes to their infant’s primitive reflexes is to know what they are,” Dr. Levine notes. “That way, they’re not alarmed when they see them, and they’re able to tell the pediatrician if any of them are asymmetrical.” For example, your baby only grasps with her right hand and not the left, or, when startled, flails her left arm but not her right. “Such asymmetries could indicate a nerve or musculoskeletal injury from the birth process and need further evaluation,” Dr. Levine says. But remember, the reflexes themselves are not harmful to your baby in any way. Dr. Segal agrees: “There is nothing parents need to do to ‘train’ their baby out of a reflex. They will go away on their own over time.”

Christina Vercelletto is a former editor at NYMetroParents, Parenting, Scholastic Parent & Child, and Woman’s Day. She lives on Long Island with her kids, a chiweenie, Pickles, and a 20-pound calico, Chub-Chub.

New City, NY For over 29 years, Kreative Kids has provided a nurturing and fun-filled toddler/nursery program where classes are kept small for individualized atten...

Allendale, NJ Sky Zone is the world’s first indoor trampoline park. We’re the inventors of “fun fitness” and the makers of trampolines as far as the eye can see. We...